Hermès Celebrates Brilliant Hues Via Each Square of Silk 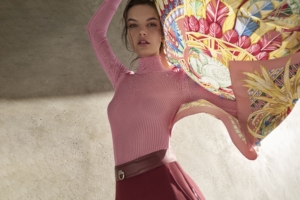 Founded as a harness workshop in Paris in 1837, Hermès was already a highly successful firm when it debuted one of its most coveted items a full century later: the iconic silk scarf. But from that 1937 moment, the path of the legendary house would forever be rooted in the duality of color and handcraft.

In 1948, Emile Hermès and his son-in-law, Robert Dumas, made the second decision integral to one of the world’s most sought-after accessories. A silkscreen printer in Pierre-Bénite, located just 12 kilometers from Lyon, France, proved to be the ideal site for the quality, intricacy of design, and variety of colors they were seeking for their rapidly evolving scarf collection. It’s the same firm Hermès uses to this day and is wholly focused on the design and production of the highly collectible silk-twill scarves, with the start-to-finish process still largely done by hand

Every element of a scarf’s creation continues to fascinate, from the designers enlisted each year to create new and often limited-edition motifs to the in-house color specialists who identify and plan the range of hues needed for each piece. For the Danse Pacifique scarf, designer Laurence Bourthoumieux’s tribute to the culture of Papua New Guinea, the feathers and seashells depicted are rendered in seven different color families, from pale tones of pink, yellow and green to more vibrant shades of brilliant red, blue and gold.

Yet the color story in each design expands beyond the color trio Hermès employs to identify each piece: A typical scarf includes an average of 27 colors, and with the most intricate designs, that number climbs

far higher. Fold in the lengthy tables where each design continues to be silkscreened by hand, with each color individually applied, and it’s easy to understand not only why each Hermès scarf takes roughly 18 months to produce, but also why today it remains a true icon of style.