Evoking Joy: The Haas Brothers Reflect on Their Gorillas in the Mist Sculpture

The Haas Brothers, twins Nikolai and Simon (b. 1984), had a creative upbringing in Austin, Texas where their opera singer mother, actor brother and sculptor father taught them to play music, write, sing and paint. Starting in their early teens, they studied stone carving under their father, mastering the craft before leaving home. They founded The Haas Brothers in 2010 and have received accolades for their exceptional craftsmanship and expansive studio practice.

Gorillas in the Mist is a unique public work designed expressly for Aventura Mall. A whimsical fountain comprised of three large-scale bronze gorillas, four massive bronze trees and five in hand-carved marble benches, the piece functionally circulates water, creating a space that is both peaceful and evocative.

We recently spoke with The Haas Brothers about Gorillas in the Mist, as well as their collaborative process. 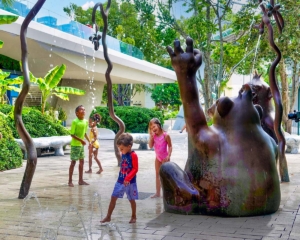 Reporter: How did you collaborate with each other on this work?

Nikolai Haas: The way Simon and I collaborated on this work was just oftentimes we’ll front load our collaboration. We’ll come up with a concept, we’ll figure out what it is we want to achieve. We create a problem for ourselves or puzzle that we want to fix. And so, there’s a lot of different things. We wanted to be funny, we wanted to make people feel good, leave laughing, cool down, wanted to feel like a Niki de Saint style sort of experience, but also have that childhood memory of us going through fountain crawls. And so, it was just supposed to be fun and easy to experience, so we came up with the idea together.

Reporter: Why is art in public spaces so important?

NH: Art in public space is important because the art world can tend to cater to a very specific type of person and end up not being seen or shown. And when you move into a public space, you get to affect more people. I think that the point of being an artist is to inspire people to think a little bit differently about themselves and the world. And if you do something publicly, you get that many more people listening to what it is that you have to say.

Simon Haas: And I think that beauty has a real function in cities. Just like beautiful churches, beautiful cultures, it’s nice to have an environment that makes you feel good, and so it’s nice to be able to make something that contributes to that feeling. A happy public is better than an unhappy public.

Reporter: How do you feel about your work being enjoyed by millions of people at Aventura Mall each year?

NH: I feel great about it. I mean, that’s the whole point of making art – so that people get to experience it. And a lot of times you make something, and it ends up like in a corner of someone’s house, which is cool too because they get to have an intimacy with it. But to give it to more people is obviously really exciting for us.

NH: But seriously, I have a kid myself and Simon is a very great, involved uncle. And I think bringing kids joy, there’s nothing more fun than doing that. And the fact we get to do it every day is pretty damn cool.

SH: And the idea that it would become a memory that they look back on happily, that’s really cool. You don’t get to do that too often with an art piece.

Reporter: What emotions do you hope to evoke with pieces like the gorillas?

NH: We definitely hope to evoke joy in people. We wanted this piece to be relatively uncomplicated in terms of what it is we wanted people to think about. And making somebody smile is already a huge win for us. We like to do that with a lot of our work. Art is for everybody.

Reporter: Art is often thought of as something you just look at. Why do you create experimental pieces that are meant to be engaged with?

SH: I think that art is an artist taking their experience and translating it so that someone else can feel it or feel whatever they want to. And we really try to evoke emotions, primarily happiness, but it’s really not just something to look at. We also don’t like the idea that a picture or an object is so precious that you’re not allowed to engage with it.

NH: We want to draw people in. So, joy is such a good way to do that because it can lead to so many other things so quickly. It can lead to introspections of yourself and make you think about your place in the world and what it is that you want to do. So, with these you take these gorillas, maybe you laugh at one of them. It’s funny. You even are with your family, and you can start to pick out which character you are, right? Like, oh, definitely mom is a meditator and dad is the big butt or whatever. And you start to create intimacy and happiness within your own family unit. That’s really the whole point of this thing is that it’s just funny and weird and that you get to put upon it whatever it is that you want to put upon it. 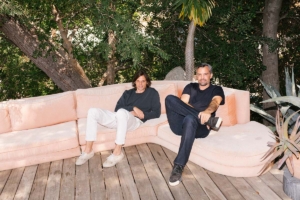 Discover The Haas Brothers’ Gorillas in the Mist in Aventura Mall’s Outdoor Courtyard.

For more information on this piece, and others in the Arts Aventura Mall Collection, visit AventuraMall.com/Arts.