Furry Friends to the Rescue in Surfside

There’s a reason dogs are considered our best friends. They are loyal, always happy to see us, and bring us comfort during difficult times. In the wake of the devastating Surfside condo tragedy, it should come as no surprise that nine golden retrievers throughout the U.S. were deployed to the city to join and support the rescue personnel overseeing the widespread recovery effort.

Read the full article below from NPR to learn more about these incredible pups. 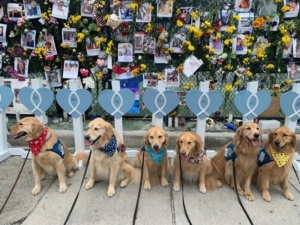 “Over the last three weeks, teams of rescue workers have been deployed from across the U.S. and around the world to help with the recovery at the site of last month’s condo collapse in Surfside, Fla.

One of the latest teams to arrive brought a much different type of assistance.

The organization says its goal was to help first responders process their grief from a grueling search in which the death toll keeps rising. 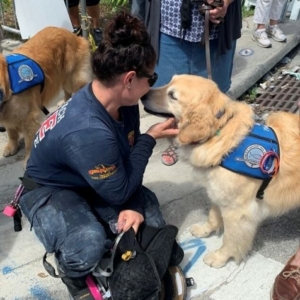 The dogs were at a makeshift memorial every day

The golden retrievers, who left Surfside this week, helped bring some much-needed respite to the first responders working tirelessly to find victims and to family members who’ve lost loved ones.

During their week at the site, the squad was at a makeshift memorial located near the collapsed tower each day. They also visited a family assistance center set up by the Red Cross and a local Publix grocery store.

The pups wore blue vests that read “Please Pet Me.” Fear said people at the memorial immediately noticed the dogs and pet them, some with tears in their eyes and others with huge smiles.

“They’re just either shocked or pleased that we show up in time of crisis just for the people that are hurting and affected by the crisis,” Fear said.

The dogs go out in times of crisis

Over 130 LCC K-9 comfort dogs serve in 27 states at hospitals, schools, nursing homes, hospice centers, rehab centers and cancer centers. They are trained to interact with people of all ages who are suffering.

The dogs are dispatched in times of disaster and crisis. They were in New York and New Jersey following Hurricane Sandy in 2012 and in Texas after the shooting at an El Paso Walmart in 2019.

In Surfside, 19 volunteer handlers used behavioral commands to engage the dogs with the first responders they met with. 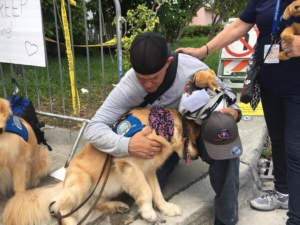 Hope, a dog from Georgia, immediately gravitated toward a teenager named Sarah who was at the family assistance center with her parents after their condo near the collapse site was evacuated. Sarah hugged Hope, then took a video of the dog with her phone.

“They’re just real sweet and pleasant when someone comes up to them,” Fear said.

LCC also placed hearts and markers at the memorial site. The group placed one for each person who died in the tragedy as they were identified, and visitors to the memorial site can sign them and leave condolence messages.

“Our prayer for [first responders] is that they make it through, they find what they need to mentally process and to know, in their minds, that they found someone’s loved one, they made a difference for the families,” Fear said. “And I hope they hang on to that.”

Dalia Faheid is an intern on NPR’s News Desk