Back in the day, you could buy denim as stiff as a board — the kind that was so tough, it could nearly stand up on its own. That toughness provided miners, cowboys, bikers and so many others with the durable pants they needed. As they wore their jeans over the years, each pair would become unique. The sun would fade them, nearly permanent creases would form and worn-in areas on their thighs would appear.As jeans became globally ubiquitous, people wanted the same broken-in look (that months in the saddle might bring) from the start.

So today, unless you’re buying it raw, your denim comes “finished” (a.k.a. any treatment, like stonewashing, added to a pair of jeans after they’ve been cut, sewn and washed.) 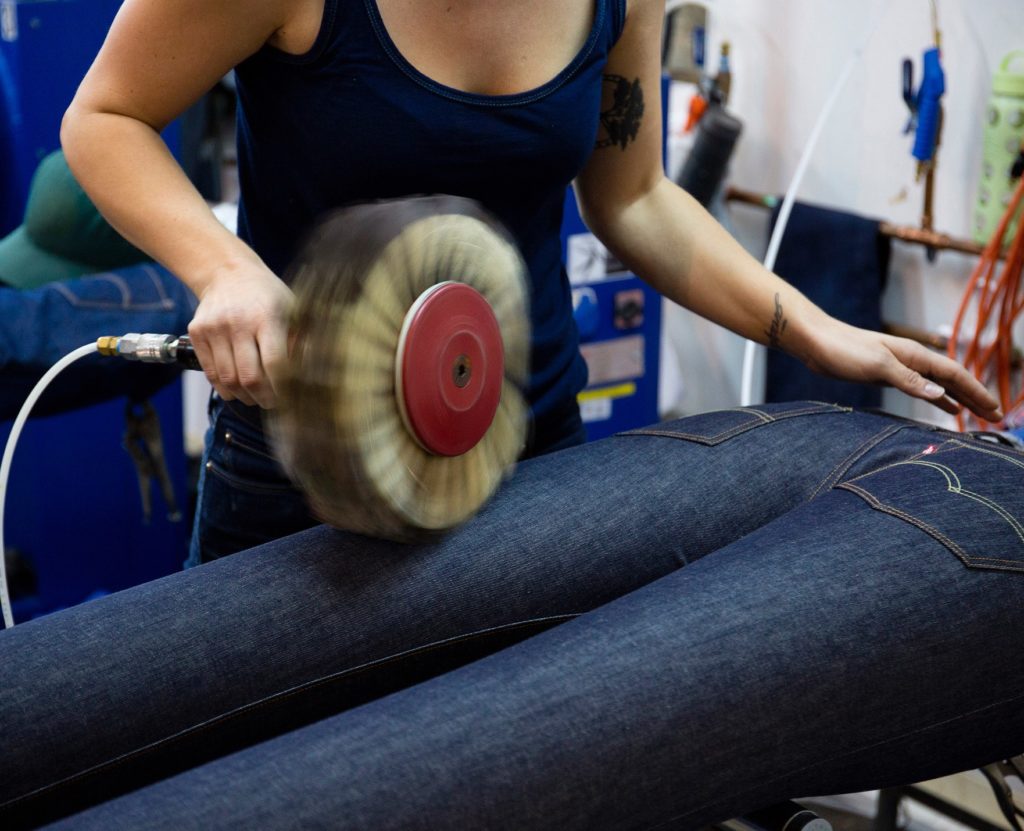 Designers rely on a seemingly infinite creative palette to finish jeans and offer new looks that fit right from the start — no shrinking needed. But to achieve these looks often means using water — a lot of it.  For instance, giant washing machines literally tumble stones with jeans so they’re stonewashed. While many of the countless finishing techniques have been around for decades, we’re still looking to shake things up a bit — for the better.That’s where Water<Less® comes in.Our designers challenged themselves to get the same looks we all love but using less water in the finishing stage. That’s why Levi’s® developed more than 20 innovative techniques that do just that: use less of our world’s precious natural resource.

What might a Water<Less® technique look like? Sometimes we simply use a thimble of water and a bit of ozone instead of detergent. To get a soft feel typically achieved by using fabric softener, we might tumble jeans with bottle caps and golf balls, taking the water out of the wash altogether. The end result remains the same: the jeans you love made by using less water.

Through 2019, 69% of Levi’s® bottoms were made Water<Less. But that’s not enough. Water scarcity is becoming one of the world’s greatest challenges. So we invited 20 competitors to our Eureka Innovation Lab and shared all of our water-saving practices with them. We open-sourced our Water<Less® innovation for others in an effort to learn and improve. Together, we can shift the industry by using less water and making a positive global impact.