Dying Malls? This One Has Found a Way to Thrive

Aventura Mall, near Miami, isn’t shy about investing in its infrastructure and is widely considered one of the most successful malls in the country. 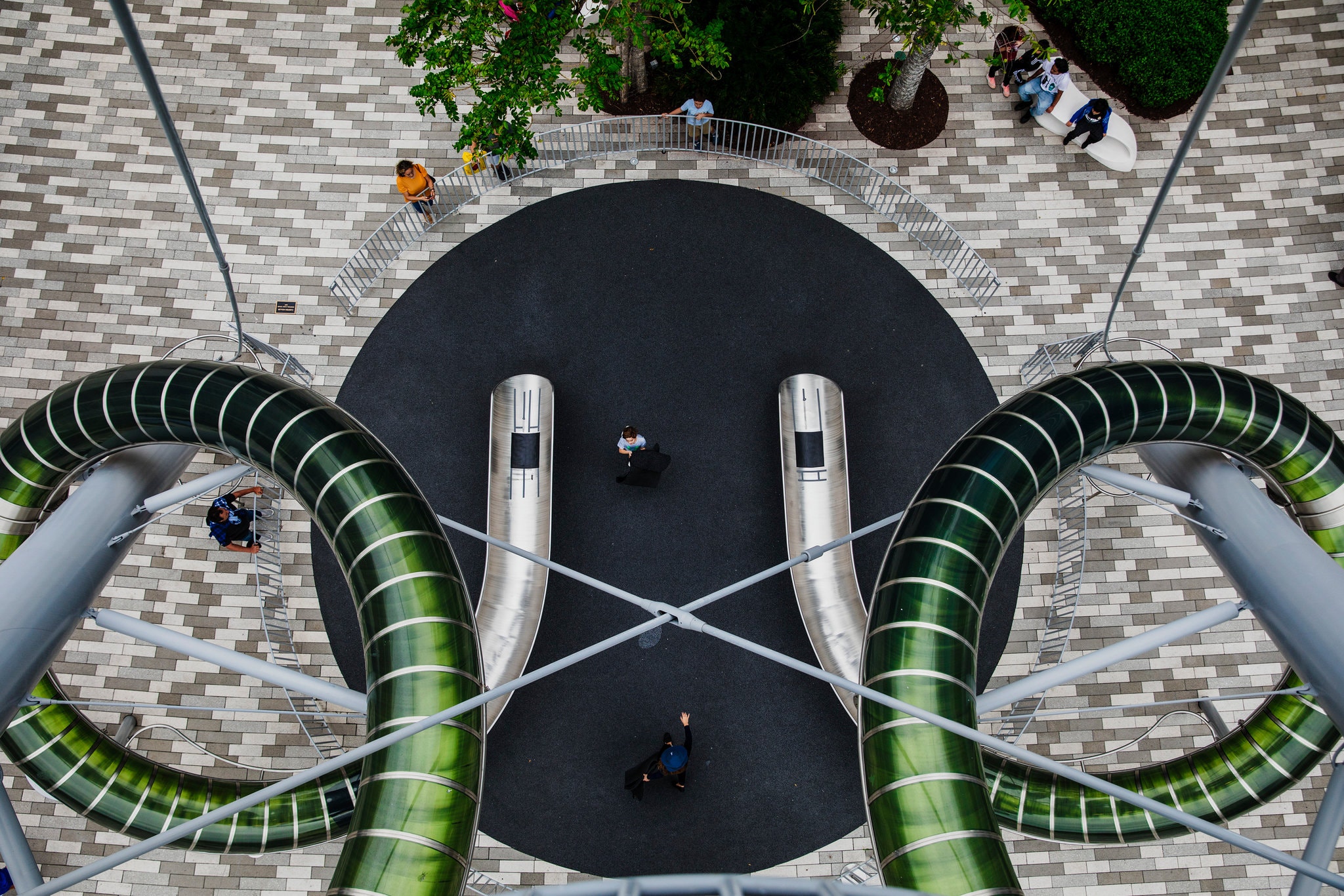 Some retailers have turned to extras like virtual-reality headsets and touch-screen mirrors to give shoppers an experience they can’t get online.

Aventura Mall, a shopping complex between Miami and Fort Lauderdale, is using a nine-story slide.

The double-chute tower, which began offering rides in 2017, invites children and adults to grab hold of mats, rocket around corkscrew turns and whoop 93 feet down.

In emphasizing low-tech entertainment over cutting-edge gadgetry, Aventura is betting that brick-and-mortar retailers can beat online vendors without having to play their game. The mall’s owners, Turnberry Associates and Simon Property Group, have also installed whimsical sculptures, a terrace-lined party venue and carnival-style games of chance. 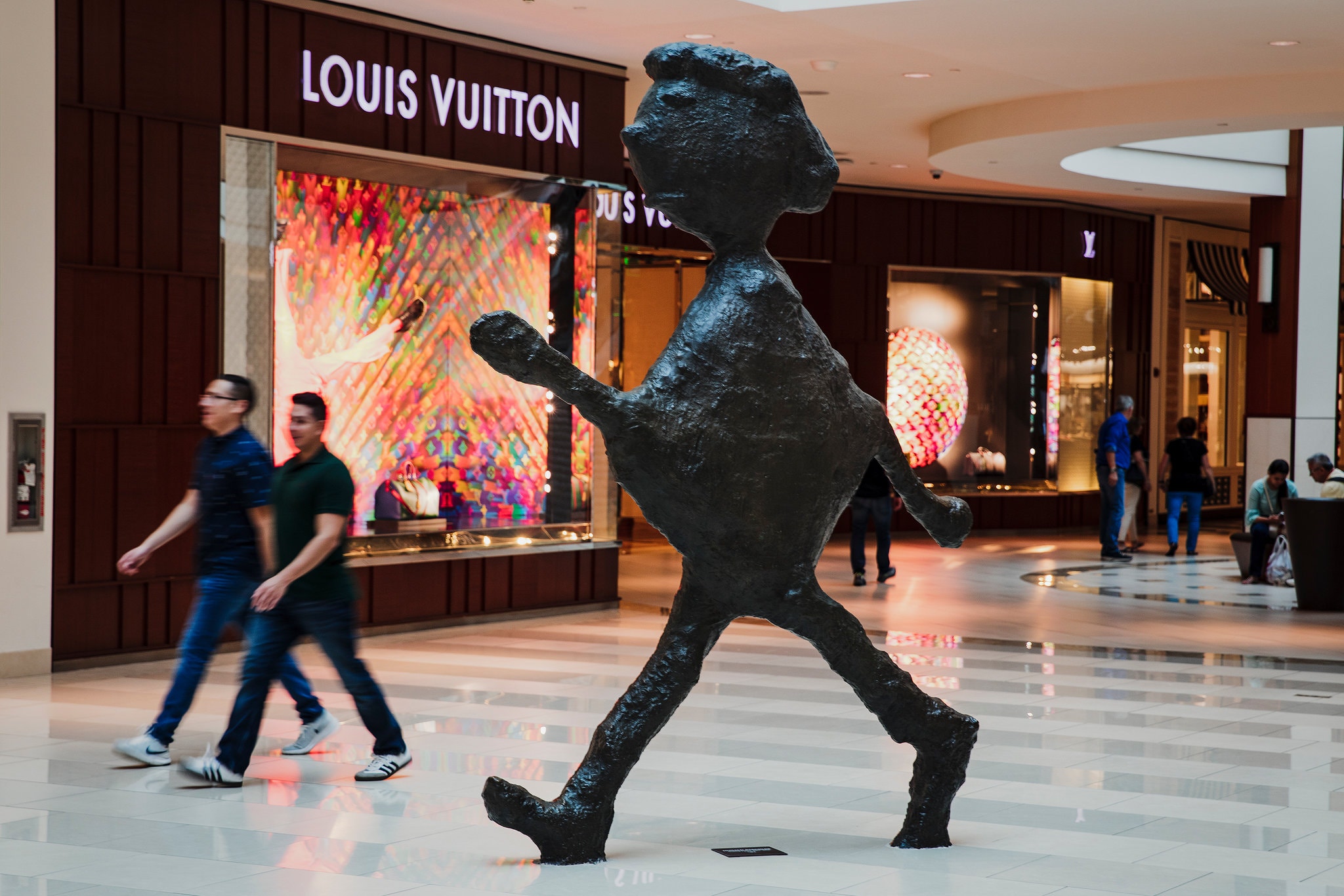 “Walking Figure,” a sculpture by Donald Baechler at the mall.Credit...Scott McIntyre for The New York Times

And as unlikely as it is for a 37-year-old property filled with chain stores to be at the forefront of anything, Aventura may have stumbled on a winning formula. With nearly a 100 percent occupancy rate, according to Turnberry and outside analysts, the mall is widely considered one of the most successful in the country, which may be particularly notable as store closings mount.

Sears and Kmart, which have the same parent company, have shut down about 3,500 stores in the past 15 years, and will soon close 100 more, according to a November announcement. Macy’s has announced more than 100 store closings since 2016, and Toys “R” Us liquidated all of its locations in the United States, about 800, in 2018. And this month, Pier 1 Imports said it would close about half its stores, or 450, as it weighed bankruptcy.

Despite the struggles that physical stores face, the number of enclosed malls in the country has grown, clocking in last year at 1,170, which was higher than at any point in the last 50 years, according to the International Council of Shopping Centers, a trade group. Some malls have gone out of business and have even been demolished, but others continue to take their place, according to the trade group, suggesting that the death of the mall has been exaggerated, as Aventura can bear out.

“If any mall did as well as Aventura, their owners would be very happy,” said Steven Henenfeld, a Miami retail broker with Colliers International, who is not affiliated with the property. “And when all you ever hear about are malls going dark, Aventura really is an anomaly.” 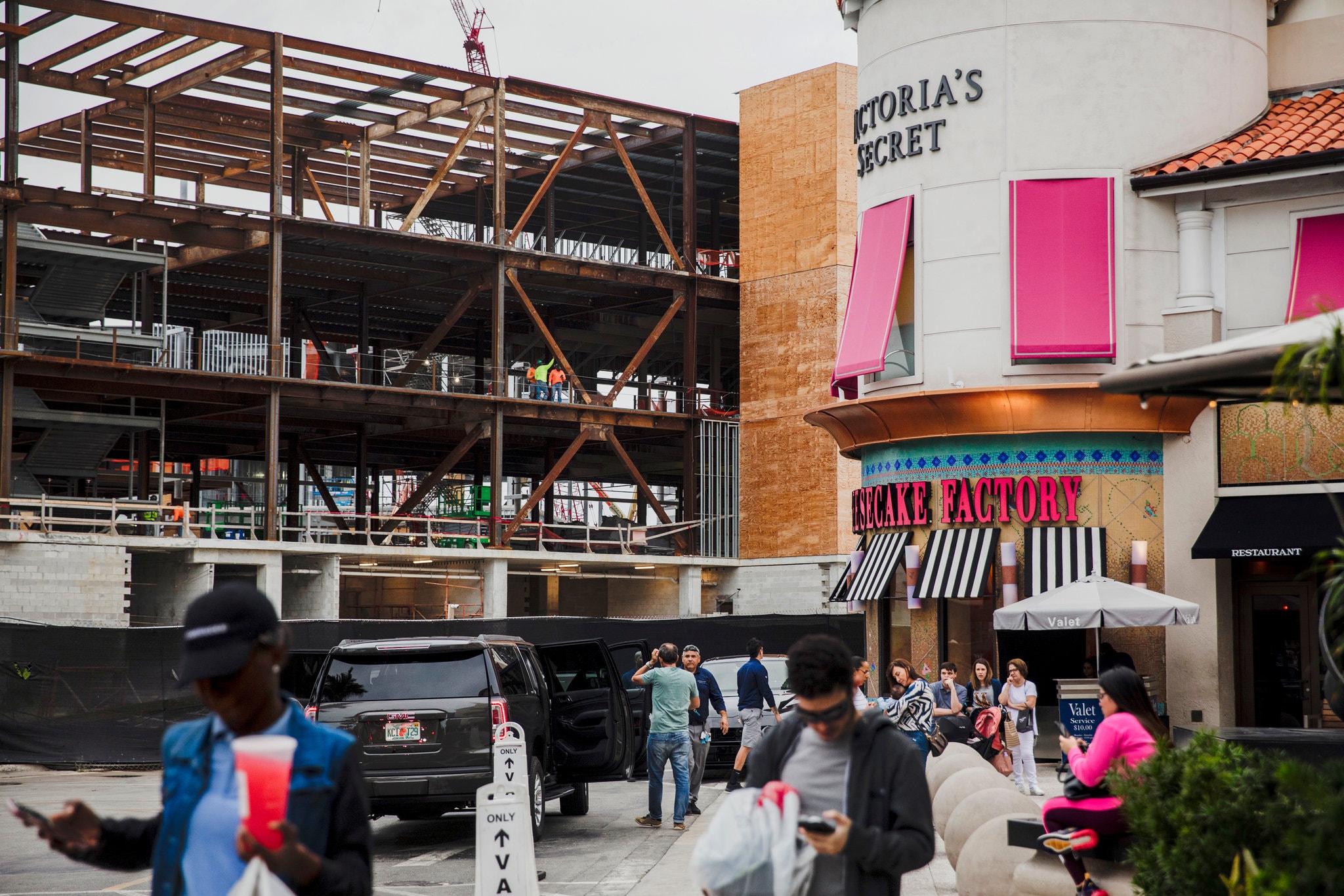 Construction work on Esplanade at Aventura, a 315,000-square-foot, open-air retail project on the site of a former Sears.Credit...Scott McIntyre for The New York Times

Aventura is not the only mall that is bucking trends. Other large, luxury-focused properties seem to be weathering the retail apocalypse equally well. One is Mall of America in Bloomington, Minn., the largest mall in the United States at 3.1 million square feet. Others are South Coast Plaza in Costa Mesa, Calif.; the King of Prussia Mall near Philadelphia; and Fashion Show in Las Vegas, which all have healthy vacancy rates of less than 3 percent, said Kevin Cody, a senior consultant at CoStar, which provides analytics on commercial real estate.

At Westfield Century City in Los Angeles, customer visits rose 93 percent from 2017 to 2018 after a $1 billion renovation, according to Placer.ai, a company that analyzes foot traffic using cellphone data.

Anchored by department stores like Nordstrom, Bloomingdale’s and J.C. Penney, and featuring the long halls lined with smaller stores that have characterized mall design since the 1950s, Aventura in some ways seems to be a typical shopping destination.

But the property has not been shy about investing in its infrastructure, and has grown by about 50 percent in size since 1983. Today, it offers 2.5 million square feet of stores, making it the ninth-largest enclosed mall in the country, according to CoStar.

That an old mall could offer newly built storefronts was appealing, said Kenny Minzberg, a vice president of Psycho Bunny, a clothing company that had been selling mostly online before choosing Aventura for its first physical store. The 1,600-square-foot outpost, which opened in 2018, is near stores for Warby Parker and Casper Mattress, other retailers that began life on the internet.

The expansion also made over an existing food court, giving an upscale polish to a mall staple. Now called Treats Food Hall, the eatery sells lobster rolls, Cuban food and pizza. Nearby is a ceviche restaurant, a barbecue joint, and Tap 42 Craft Kitchen and Bar, which, in an un-mall-like arrangement, has outdoor seating and serves drinks past midnight. Two hair salons, two nail salons and a Tesla dealership are also in the mix. 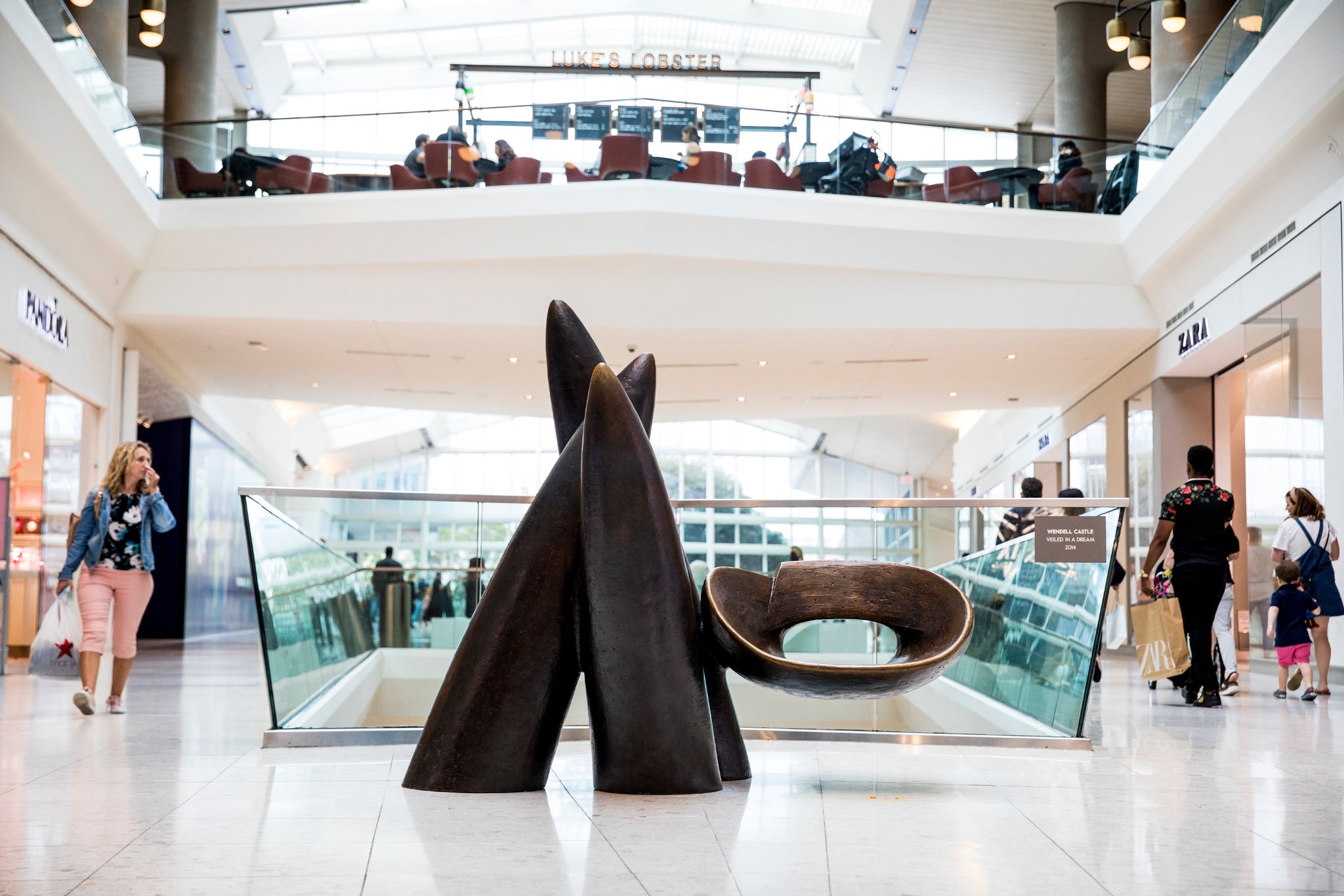 Wendell Castle’s "Veiled in a Dream,” a sculpture with a public seat, near the food court at Aventura Mall.Credit...Scott McIntyre for The New York Times

Turnberry “continues to evolve and innovate about how a mall should be in the 21st century, which is beyond just a destination for shopping,” Mr. Minzberg said.

Art, inside and outside, seems to help, including figurative sculptures resembling huge heads by Ugo Rondinone, a sculpture of a strolling girl by Donald Baechler and that curvaceous slide, from Carsten Höller.

Events are also part of the equation. A sleek, third-floor event space that can be rented out for up to 700 guests for weddings, fashion shows and art exhibits opened last year. Every Saturday and Sunday, the mall hosts a farmers market in an atrium. A train show, with a miniature model of the mall, takes place around Christmas. Violin ensembles play. And there’s also the usual mall staple, a movie theater.

Vendors get in the act. Last month, the fashion company Tory Burch introduced a game in a nearby hallway with a tall, brightly colored peg board that wouldn’t look out of place on a carnival midway. It drew long lines all month, Turnberry said.

“I think human beings are social creatures, which is why they go to Starbucks even when they can make coffee at home,” said Jackie Soffer, chief executive of Turnberry, who added that even die-hard online shoppers needed to get out once in a while. 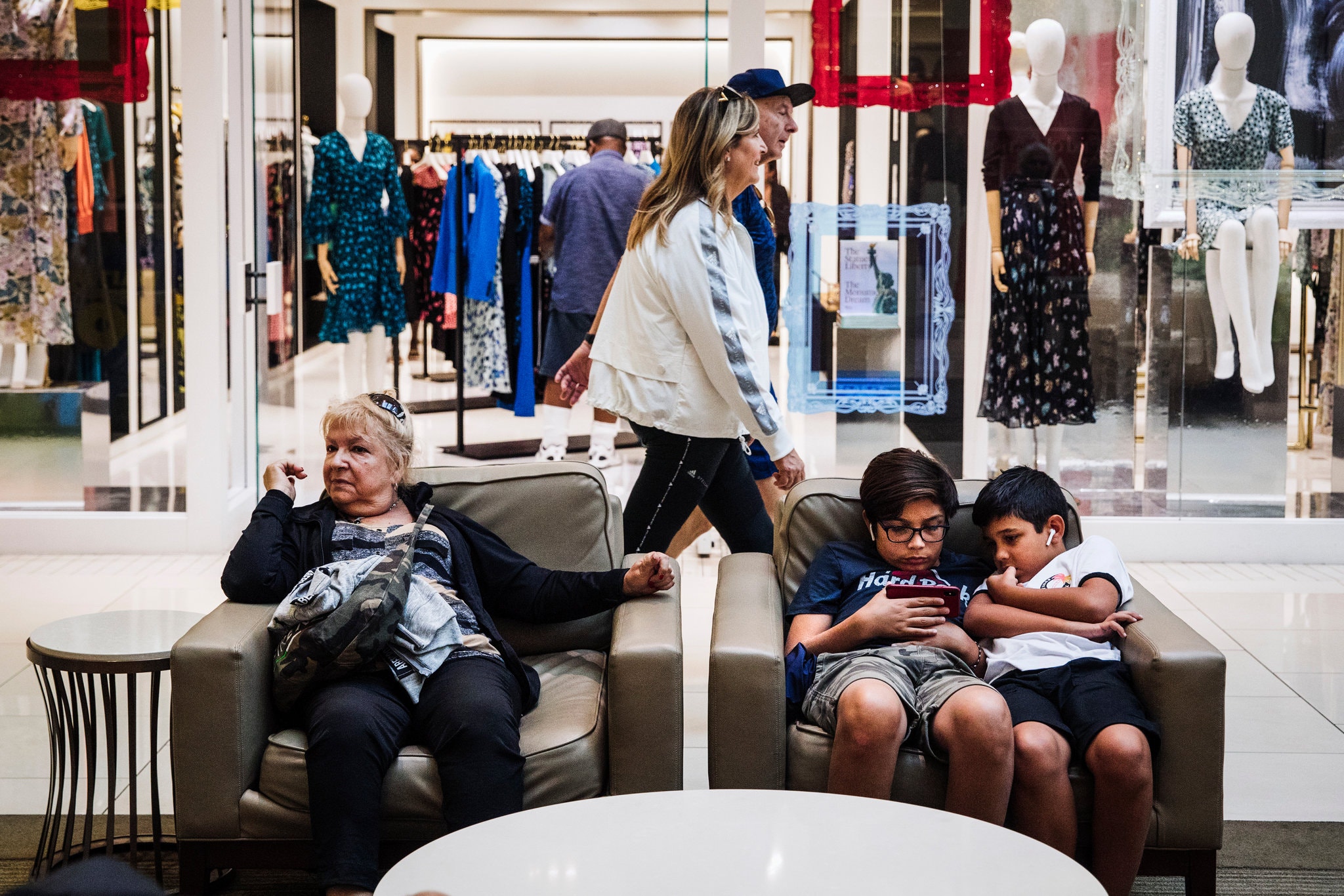 With an occupancy rate of nearly 100 percent, the mall is widely considered one of the most successful in the country. Credit...Scott McIntyre for The New York Times

And with online sales accounting for only about 10 percent of all transactions, there are still plenty of opportunities for old-fashioned retailing, Ms. Soffer said.

“When the internet hit, brick-and-mortar retailers decided to spend their surplus on the web and did not spend it on their stores, which was a mistake,” she said. “They put themselves in harm’s way.”

Aventura, which receives about half of its 30 million annual visitors from South America, is not immune to the problems affecting other retailers. A Sears store closed in 2017 and is now being redeveloped as Esplanade at Aventura, a 315,000-square-foot, open-air retail project from Seritage Growth Properties, a real estate investment trust spun out of Sears Holdings. Its first phase, which will have many restaurants, is expected to open this year.

But though Esplanade and Aventura sit cheek by jowl, the two have not always been neighborly. In 2016, concerned about the competition posed by Aventura’s new wing, Seritage sued Turnberry to stop it. Both sides later settled.

If Turnberry is concerned about the proximity of a potential competitor, it’s hard to tell. “I don’t know that we’re going after the same tenants,” Ms. Soffer said. 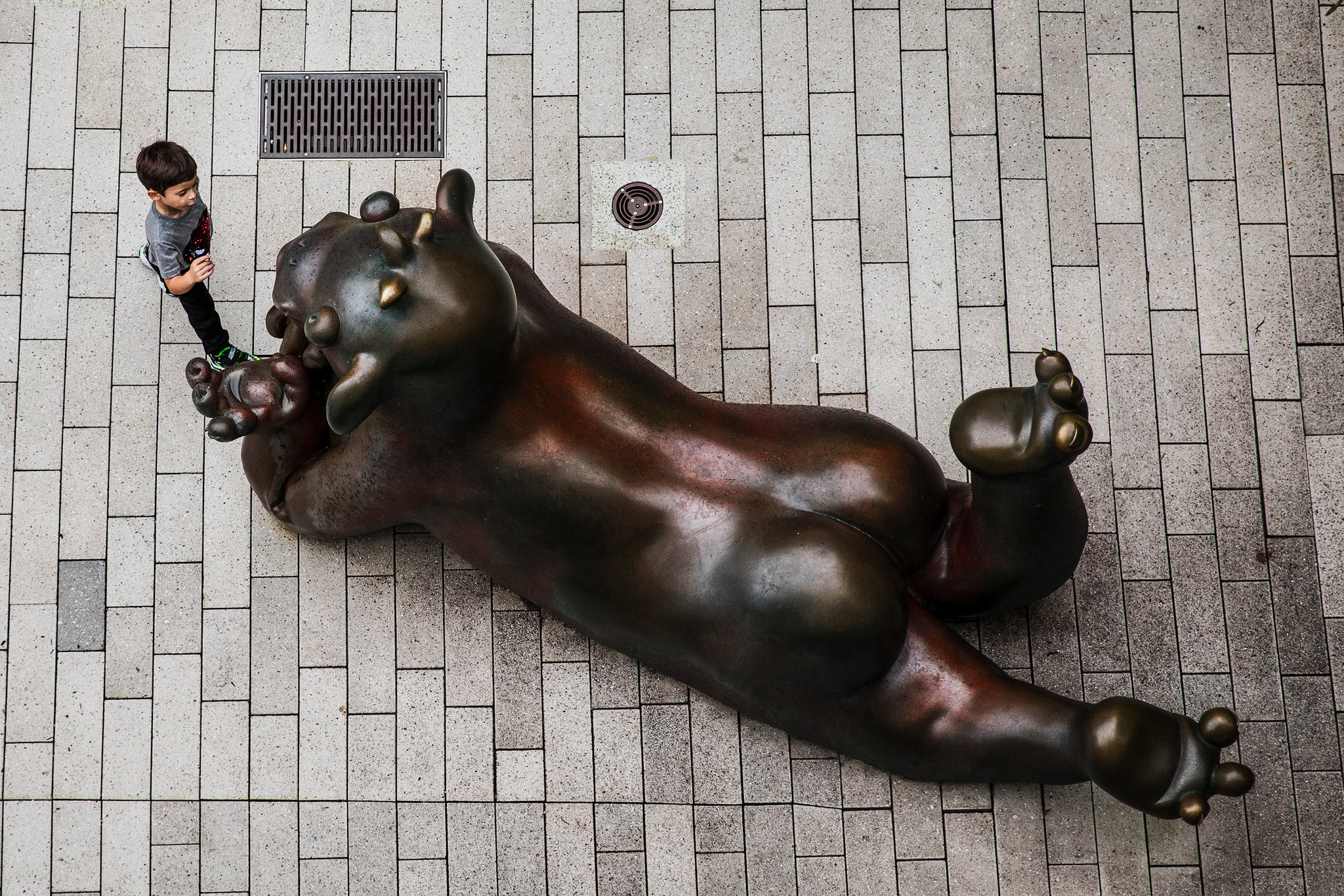 One of the bronze statues from "Gorillas in the Mist,” a fountain at the mall.Credit...Scott McIntyre for The New York Times

Smaller businesses have closed, too, like Topshop, the British fashion chain, which shuttered its two-level store last year after filing for bankruptcy.

Slime City, a Nickelodeon-themed offering that provides green goo for children, is now occupying the space through a pop-up lease. And a new long-term tenant, which Turnberry declined to name, will move in this year. Company executives also declined to share asking rents, but brokers say they could be as high as $200 per square foot annually, plus maintenance charges.

A bigger blow could come if Macy’s and J.C. Penney were to shutter their Aventura stores, depriving the mall of a pair of anchor tenants, brokers and analysts say.

But overall, the property, which shoppers praise for its ample parking — more than 9,000 spaces, many in garages near front doors — seems to be doing well for the Miami area, where the retail vacancy rate is 3.6 percent, according to CoStar. The national rate is 4.7 percent.

“They have done a real good job about not making this seem like a boring strip mall out in suburbia,” said Alex Rudolph, a partner of Tap 42, which opened at Aventura in 2018. “This mall is just different.” 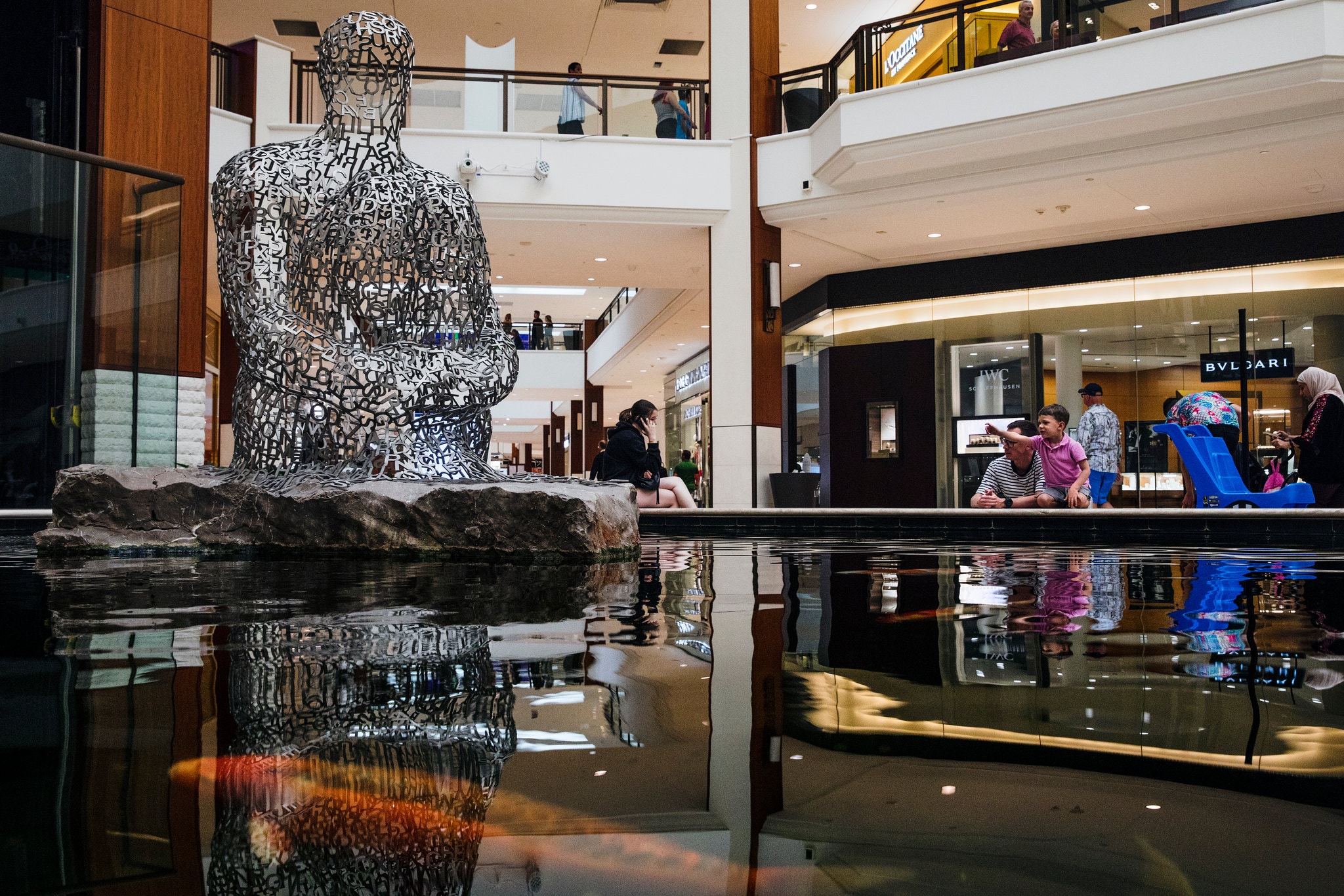 A koi pond and a sculpture by Jaume Plensa on the lower level of the mall.Credit...Scott McIntyre for The New York Times