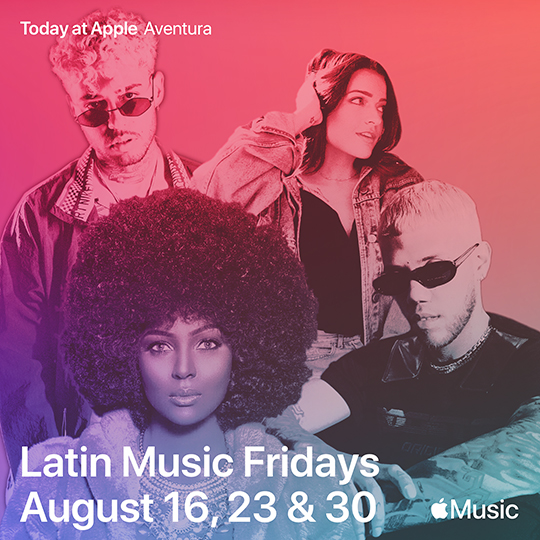 Celebrate reggaetón, trap, and more during Latin Music Fridays, in partnership with Apple Music. On August 16, 23, and 30, you’ll join internationally renowned and local musicians to explore how culture influences music and create your own Latin music.

Kick off Latin Music Fridays by learning how to write verses and lyrics with Latin songwriters Ale Alberti, Edgar Barrera, and Jhay Cortez. They’ll join producer Andrés Saavedra in conversation about how their cultural backgrounds inspire their lyrics. You’ll get hands-on with iPad to create your own song concept in the Notes app. Then on August 23, join a performance with Dalex and Dímelo Flow.

As we wrap up Latin Music Fridays in partnership with Apple Music, Dominican American artist Amara La Negra will share how culture is woven into her music. She’ll play an acoustic set of songs from her debut EP, Unstoppable. You’ll get hands-on with iPad to explore how your culture inspires your musical choices and curate a playlist in Apple Music that reflects your style.